Those who love criminal investigation anti-terrorism dramas must have seen the American drama "Person of Interest." In the play, Harold Finch, a genius of AI technology, developed an artificial intelligence system called "The Machine" that can predict terrorist attacks.

The system uses image and video recognition technology to identify the characters and vehicles captured by the lens, cleanse, classify, and link the information, and then determine whether there are abnormal behaviors based on daily activity data analysis. If a suspicious person is detected, the person's information is compared with the information in the library, allowing the AI â€‹â€‹to assist the police in identifying the crime information and even predicting the possible criminal behavior. The efficiency of the criminal investigation work has thus been greatly improved.

As the current emerging technology, gait recognition has become a powerful factor in the field of biometric identification with the characteristics of long distance recognition, wide application range, and non-controlled characteristics, which promotes the continuous development of identity recognition technology.

1. General physiological characteristics can only be identified

What we call BIOMETRICS technology refers to personal identification through the use of the physical characteristics (fingerprints, irises, facial, DNA, etc.) or behavioral characteristics (gait, keystroke habits, etc.) inherent in the human body. Technology.

Judging from the market performance of current power feature recognition, ordinary physiological feature recognition has certain fragmentation in its application process due to its own unique defects. For example, fingerprints and iris recognition all have their own specific technology and it is difficult to Many elements are perfectly integrated.

However, in the current â€œsociety of efficiencyâ€, â€œsingle fight aloneâ€ with a single common physiological characteristic can hardly satisfy peopleâ€™s fast-paced and high-efficiency work and life demands. Therefore, the development of a more convenient and efficient identification method will be likely to become a biological recognition. The "new blue ocean" in the field.

For gait recognition, it avoids the disadvantages of identifying other physiological features. On the one hand, gait recognition has a wide range of applications and can be identified beyond 50 meters. On the other hand, "non-controlled" guarantees that gait recognition does not require object cooperation and can achieve 360-degree dead-end recognition; finally, different The characteristics of body shape, head shape, muscle strength, sensitivity of motor nerves, walking posture and other characteristics determine the gait has better distinguishing ability.

In CCTV1â€™s artificial intelligence program â€œWistic Manâ€, Yinhui Dripping CEO Huang Yongsheng led his project to successfully defeat the â€œMost Powerful Brainâ€ memory master, and identified the target â€œsuspectedâ€ from 10 people of similar size and height, from 21 The golden retriever dog with the similar coat color and the silhouette identified the target golden retriever and was praised by the Turing Award Winner Yao Chih-chih for "wisdom."

In fact, gait recognition technology has been widely used. As the â€œnew blue oceanâ€ for the development of the identification field, Yinhe Drop applies its technology to multiple fields such as smart security, smart home, robotics, and smart medical care.

Before the technology lands, it is still necessary to solve these problems

At present, with the continuous improvement of Chinaâ€™s scientific and technological strength, especially advanced technologies such as gait recognition have shifted from â€œrunning runnersâ€ to â€œleadersâ€. While we need technological breakthroughs, we can actively promote the technology to land, and then better benefit the society to give back to the community. However, there are still several problems that need to be resolved in the technology of gait recognition.

From the current point of view, the perfect commercialization of new technologies will require the â€œfew levelsâ€ to be faced:

First, the commercial nature of AI is to increase production efficiency. Only when the efficiency of AI application is much higher than that of humans, it will have a certain value of landing. Take the security field as an example. At present, the public security system still lacks effective video analysis and retrieval tools. On average, every current case still requires manual review of hundreds or even thousands of hours of video data. The workload is voluminous and the police resources are greatly occupied. , affect the efficiency of detection. Galactic droplets use gait recognition technology to detect criminal suspects, can quickly target the target population, greatly increase the level of public security system information, speed up the detection of various criminal cases.

Second, whether the technology has a market. The market is the terminal for technology applications. In terms of market development and commercialization promotion, Galaxy Drop collaborates with the United States, public security agencies, and other institutions to jointly develop smart home appliances based on the â€œhuman-computer new generationâ€ strategy of the United States; and an integrated search system for face gait recognition created jointly with public security agencies. To further expand the artificial intelligence market.

Finally, is there sufficient adequacy of technological innovation? With the continuous development of AI technology, gait recognition as an emerging technology still needs innovation or progress. Galactic dripping gait recognition technology, as an important project of the STS (Science and Technology Service Network Program) of the Chinese Academy of Sciences, is technically directed by Academician Tan Tiediu, and has more than 100 R&D teams to assist in the subsequent innovation breakthrough.


Combine might have taken the harvesting job away from tractors, but tractors still do the majority of work on a modern farm. They are used to push / pull   implements  -machines that till the ground, plant seed, and perform other tasks.

Tillage   implements prepare the   soil   for planting by loosening the soil and killing   weeds   or competing plants. The best-known is the   plow  , the ancient implement that was upgraded in 1838 by   John Deere  . Plows are now used less frequently in the   US   than formerly, with offset disks used instead to turn over the soil, and   chisels   used to gain the depth needed to retain moisture.

The most common type of seeder is called a   planter  , and spaces seeds out equally in long rows, which are usually two to three feet apart. Some   crops   are planted by   drills  , which put out much more seed in rows less than a foot apart, blanketing the field with crops.   Transplanters   automate the task of transplanting   seedlings   to the field. With the widespread use of   plastic mulch  , plastic mulch layers, transplanters, and seeders lay down long rows of   plastic , and plant through them automatically.

After planting, other implements can be used to cultivate weeds from between rows, or to spread   fertilizer   and   pesticides  .   Hay   balers   can be used to tightly package grass or   alfalfa   into a storable form for the winter months.

Modern   irrigation   relies on machinery. Engines,   pumps   and other specialized gear provide   water   quickly and in high volumes to large areas of land. Similar types of equipment can be used to deliver   fertilizers   and   pesticides  .

Besides the tractor, other vehicles have been adapted for use in farming, including   trucks  ,   airplanes  , and   helicopters  , such as for transporting crops and making equipment mob 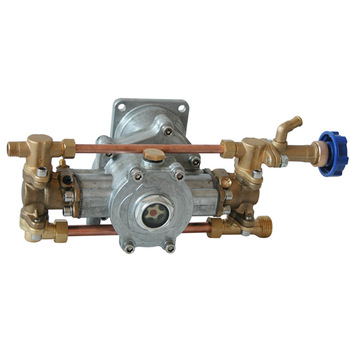