Ortrander casts components for the automotive and household industries, with revenues of $30 million last year. During 2001 and 2002, the company invested heavily in expanding production, and its production doubled in 2008. In 2007, the company's management launched a project to upgrade the company's material flow, warehousing and information flow to make these processes more transparent and effective, and to better handle high volume products. 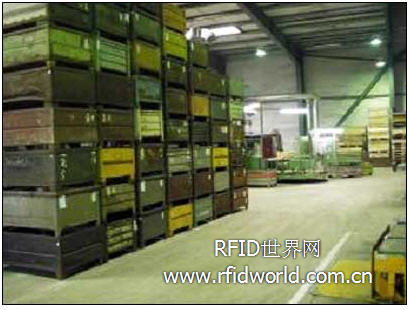 Ortrander chose Ubisense, a provider of UWB Real Time Location System (RTLS). Ubisense's UWB tag transmits a series of short signals (one hundredth of a billionth of a second or less); the extremely short nature of the pulse wave makes the tag less susceptible to RF noise and interference from metal and other nearby objects. The reader of the RTLS system receives the tag signal through the phase-arranged antenna. The reader uses two complementary techniques to calculate the label position: Time Difference of Arrival (TDOA) and Angle of Arrival (AOA). By adopting this technology at the same time, Ubisense claims that RTLS covers a region with fewer readers than a TDOA-only system.

Ortrander is currently selecting a manufacturer of passive UHF RFID systems, and the details of the specific technology used have not yet been decided. Fraunhofer ALI has developed software to link Ubisense RTLS to Ortrander's ERP system.

In early 2008, Ortrander tested Ubisense's active tags and readers, as well as Euro ID's passive tags and other components. A month later, the company began to implement the program in the factory, focusing on the active RFID part.

The forklift is fitted with two Ubisense tags, one on the roof and the other on the outside of the cab. The tag collects 6-8.5 GHz signals at a frequency of 20 times per second. Due to the large bandwidth of 1.2 GHz, the signal is less disturbed, causing the forklift positioning error to be between +/-15 cm, according to Ubisense sales manager Holger Hartweg.

Ortrander is currently installing passive UHF RFID to track the tote, which is expected to be completed by the middle of this year. Ortrander places the totes on pallets and transports them to different locations. A passive RFID tag will be installed at the bottom of each tote. When the totes are filled with cast parts, they are transported to the warehouse and temporarily stacked on the floor or storage rack.

The forklift also installs UHF RFID readers and antennas to identify UHF RFID tags on the container. Ortrander and Fraunhofer ALI are still working on label types and label sets. When the driver picks up a tote, the forklift's reader identifies the box's UHF RFID tag, which system will identify which tote and when it will be moved. This information is then combined with the position information of the forklift to let the manager know which tote was removed.

Currently, Ubisense installs a scale on the forklift to weigh the tote. The system subtracts the weight of the empty container to obtain a negative weight. Since the tote can be loaded with different cast products, these data will help determine the product in the tote.

Ortrander CEO Bernd Williams-Boock says the system helps companies position items faster and increase production visibility. The system is expected to be fully operational in the summer of 2009.

Diesel piston air compressors are flexibly and widely applied in different sites, and they even can be continuously used in the absence of electricity environment. We can often see workers operate diesel piston air compressors, matching air picks or jack hammers to punch holes on the roads. The crankcase is equipped with oil mirrors and full pressure-relief respirator. Wear-resistant copper brushing on both sides of the open connecting rod design and inclined oil slanting sheet design ensure the service life. There are two types of diesel engines that can be choose, by hand or by power.