Jujube is the most common fruit variety on the market. It is rich in vitamins and is an essential agricultural product in people's lives. In order to further improve the yield and quality of jujube planting, the northern Shaanxi region of China is used to study the canopy structure and light distribution characteristics of jujube trees on slope lands in northern Shaanxi Province in hopes of different slopes. Provide the basis for scientific cultivation and pruning of jujube trees. 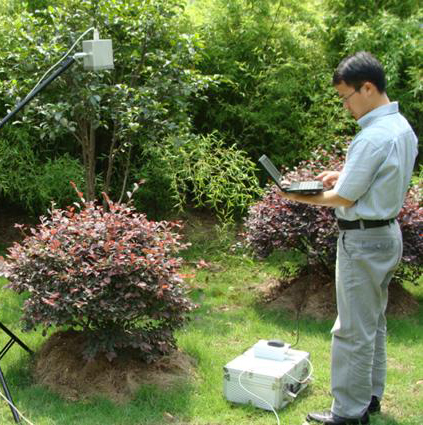 An important part of the fruit tree is the canopy structure, and the canopy structure is closely related to the interception of solar energy, the interception of rainfall, and the formation of the microclimate inside the canopy. Therefore, in modern agricultural research, the use of plant canopy analyzers to study the canopy structural characteristics of fruit trees has become an important issue in the current agronomy, and is also an important basis for scientific cultivation of fruit trees.
During the experiment, a plant canopy analyzer was used to study the effects of slope orientation on the canopy of jujube trees from early May to late October. The following results were obtained: During the flowering period of the tree, the area index and chlorophyll content of Yinpo jujube was the smallest, the gap density and the total photosynthetic photon flux density under canopy were the highest, while the area index and chlorophyll content of jujube jujube were the largest, and the gap gap and the total photosynthesis under the crown were the same. The photon flux density is the smallest, and sunny slopes of jujube trees are abundant, branches grow vigorously, canopy light interception ability and fruit production ability are the strongest. The branching, crown width, and yield of crowns of different date-oriented date gardens vary greatly. Generally speaking, the jujube tree branches, tree heights, crown widths, and yields are the largest in Yangpo, and the highest rate of high-quality fruit is jujube trees. Adequate light is also conducive to the accumulation of dry matter, the expansion of the fruit and the synthesis of sugar, good fruit development, and high yield.