During processing, when the program is running until the shifting state is required, the numerical control system first sends a stop signal, and then the program sends a control signal to start the hydraulic pump to supply oil, and the solenoid valve of the hydraulic system is sucked according to the control signal to supply the shifting cylinder. Oil, the piston rod is extended or retracted, and the fork is pushed to shift the gear. When the gear moves into position, the cam touches the micro switch, and the feedback signal is sent to the numerical control system, then the shift is over, and the program continues to run downward to execute the workpiece.

The main shaft shifting module is mounted on the main shaft box, and is composed of a bracket, a cylinder, a tubing, a micro switch, and the like. The length and width of the bracket are the same as the size of the top of the headstock. The entire spindle shifting module is mounted on the four screw holes on the headstock that were originally used to install the cover, and the positioning pin holes are added for positioning of the module. The middle part of the bracket is supported by a partition plate, the shifting cylinder is fixed on the partition plate, and is located directly above the gear shaft to be controlled to slide, and is coaxial with the guide shaft; the cylinder rod is located in the guide shaft and is coupled with the shift fork through the pin shaft; The shifting fork is sleeved on the guiding shaft and can be moved back and forth along the guiding shaft by the piston rod; the guiding shaft is hollow and has a guiding groove for coupling the piston rod and the shifting fork, and the guiding shaft is fixed on the bracket by the pin shaft Both gear shifting forks are of a downward vertical structure and are respectively caught in the shifting grooves of the corresponding sliding gears.

When the oil cylinder is supplied with oil during shifting, the piston rod drives the sliding fork to move the sliding gear through the pin shaft to make the gear shift gear. After the gear is in place, the micro switch on the cover plate is touched by the bump on the fork to send the gear in place. The signal is the end of the shift. 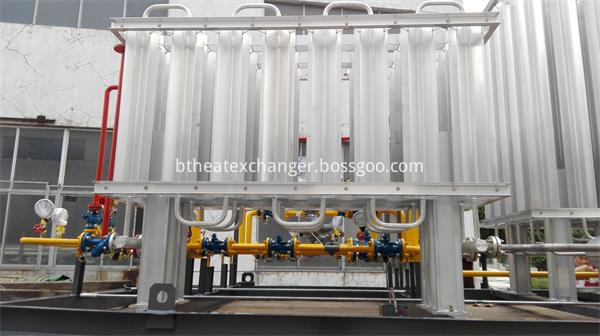